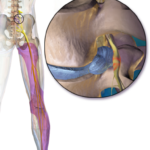 What is Sciatica: Gridhrasi (Sciatica) is a disorder in which low back pain is found, that spreads through the hip, to the back of the thigh and down the inside of the leg.

Causes: There are many causes for low back pain, however, true sciatica is a symptom of inflammation or compression of the sciatic nerve. The sciatica nerve carries impulses between nerve roots in the lower back and the muscles and nerve of the buttocks, thighs and lower legs. Compression of a nerve root often occurs as a result of damage to one of the discs between the vertebrae. In some cases, sciatic pain radiates from other nerves in the body. This is called referred pain. Pain associated with sciatica often is severe, sharp and shooting. It may be accompanied by other symptoms, such as numbness, tingling, weakness, and sensitivity to touch. Although low back pain is a common condition that affects as many as 80-90% of people during their lifetime. True sciatica occurs in about 5% of cases.

Ayurveda Prospectus: Gridhrasi is a Shoolapradhana Nanatmaja Vata-vyadhi, intervening with the functional ability of low back & lower limbs. In this disease onset of Ruk (pain), Toda (numbing pain),  and Stambha (stiffness) is initially in Kati (lumbosacral region) and radiates distal to Pristha, Janu, Jangha till Paada.

Due to Vata in Kandara (tendon), the pain is produced at the time of raising leg straight, and it restricts the movement of the thigh. This is an important clinical test for the diagnosis of sciatica known as SLR. In Madhava Nidana, Dehasyapi Pravakrata (Lumbar scoliosis) is considered in Vataja type of Gridhrasi.

Age Group: Sciatica is more common between 30 and 50 years of age.
Symptoms: Pain in sciatica is very severe, which makes the patient difficult to walk; hampering the daily routine of
the individual. No satisfactory treatment available in modern medical science, patients depends on
pain killers which have temporary action.

The line of Treatment According to Charak Sanhita: In Charaka Samhita, Gridhrasi is counted as a Swedana Sadhya Vyadhi and Basti Karma also indicated in Gridhrasi Roga.  Patrapinda Swedana for 21 days and Erandmuladi Niruha Basti as Karma Basti schedule were used as Panchakarma procedure. From the Shaman point of view, various medications that soothe the severity of pain and improve functional ability are adopted in Gridhrasi. As Ekangaveera Rasa, Dasmoola Kwatha, Ashwagandha Churna, and Triyodashangaguggulu were also given as oral medicine.